What a week! Tuned Media had the privilege to be the official media sponsor for the first annual Mustangs at Daytona event. The Florida sun shone over some beautiful Ford Mustangs July 15-21, 2019 and we were glad to be part of it.

Founder and organizer Jeff Dixon told us, “While this vision of mine was just that, a vision, me and my partner Julia Sickafoose made it a reality with a hard 9 months. People said we were crazy to do a car show on the beach in July and with a few hurdles we jumped them…” Yes, they did!

It was a successful first year with more than 100 unique ‘stangs turning up to enjoy the events. With cruises to Universal Studios and Kennedy Space Center, a drag night, car show and an awards ceremony, the whole week was a perfect mix of excitement and social gatherings.

With tons of awards for every class of Mustang, we chose some of our favorite awards given away at the end of Mustangs at Daytona 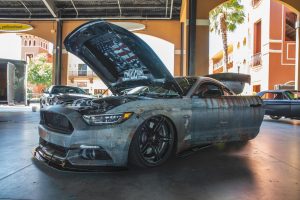 Jeff commented “The response was awesome with most everyone there asking to register for next year. We met a lot of great people and saw some amazing rides and we are already setting up next season’s show.” Jeff has announced next year’s show is scheduled for July 13-18, 2020. Keep updated on dates, events, and locations on the Mustangs At Daytona group page on FaceBook. See you there!